A patio is fast becoming an essential feature for the modern garden.  It’s a perfect place to sit back and relax during summer, or, with the help of a patio heater, during winter.  With the right investment, it can function as an additional room in the house – one that does the job of a lounge, a dining room and a kitchen.

But if you’d really like to make your patio an effective part of your home, you’ll need a suitable patio door – something that’ll break down the barriers between the exterior and interior of your property, allow the maximum amount of sunlight into your home, present an unobstructed view of the world outside – and make your patio look great in the process.

Of particular interest in recent years are bi-folding patio doors. These sorts of door come with not just one hinge along the side, but one in the middle as well.  In fact, they can have as many folds as you see fit – allowing for multiple panels to be arranged in a concertina, so that the entire thing can fold back into a very small space.  One of the key strengths of the folding patio door is that it can be made extremely wide – allowing you to effectively replace an entire wall of your building with a folding door, opening out your interior to an unprecedented degree.

Those considering investing in a folding door for their patio might have a number of questions in mind before they make their decision.  Let’s consider a few of them. 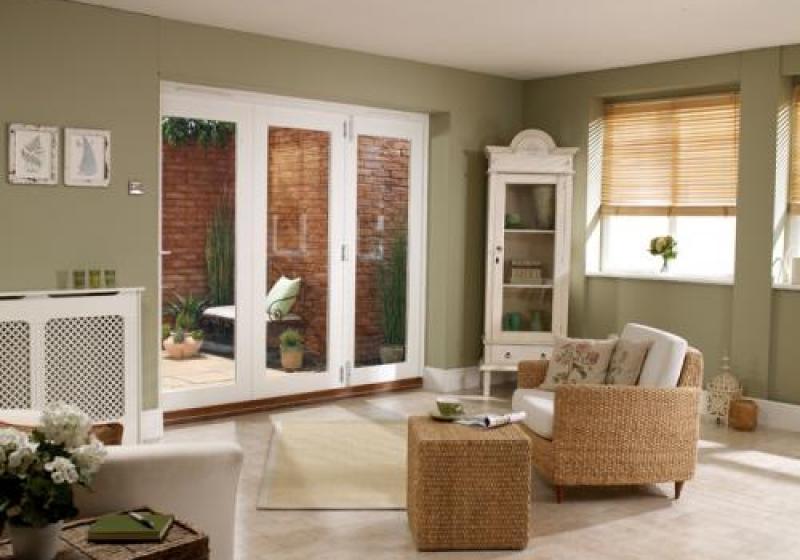 Bi-fold doors, provided they’re of a sufficient quality, are no more or less draughty than any other form of patio door.  As they open and close, they might allow larger quantities of air through the gaps which open at the top and bottom of the door – and if they’re not fully closed, this might become a problem.  It is, however, obvious when a folding door isn’t quite closed, as it’ll protrude slightly from the rails which run along the top and bottom of the door.

As a folding door ages, it’ll deteriorate in the same way as any other door – though the rate of this deterioration will depend on the material being used.  With the right maintenance, the chance of a draught forming in a wooden door can be greatly reduced.  By re-applying a coat of wax to the door during summer, you’ll be able to substantially reduce the amount of moisture that can find its way into the wood, and thereby reduce the effect of warping which can lead to gaps forming.

If your door has formed a draught, then you might be able to address the problem by reapplying sealant to the affected area.  Use a candle or a specially-designed draught detector to discover the source of the draught, and take action accordingly.

What Is An Access Door and Do I Need One?

If you’re opting for a bi-fold door, then you might run into a problem, particularly during autumn and winter – opening the door will allow a considerable amount of cold air into your property.  Moreover, it’ll require a lot more effort than might be required to open a set of French doors.  This is where access doors come in.  They’re single-panelled doors which sit on one side of your folding doors, allowing you to easily access the outdoors without folding out the entire door.

Folding doors can be arranged in a number of different configurations.  There are symmetrical ones, where two sets of folding panels meet in the centre; there are asymmetrical ones, where a single set of panels unfolds from one side; and there are access-door style arrangements where there is one panel on one side and the remainder on the other.  You might see the terms ‘4+1’, ‘5+1’ and ‘6+1’ used to describe folding doors with access doors, where the former figure in each pair is used to describe the number of panels on the other side to the access door.

How Secure are Bi-Folding Patio Doors?

Patio doors have something of a reputation as being a burglar’s favourite; when we consider that they’re competing with the window and front door, it might seem logical that a burglar would be attracted to the patio door.  Folding doors are no less secure than any other form of patio door; it’s only when they’re misused, or deprived of the required care and attention, that they become security risks.

If your door contains a large amount of glass, it might seem as though a burglar will be easily able to smash the glass and gain entry.  Burglars, however, tend to be reluctant to do this, as doing so will create a loud noise, a considerable potential for injury, and a preponderance of forensic evidence.  A far greater risk posed by the glass is that intruders will be able to see into your property and all of the high-value goods therein.  Patio doors usually aren’t visible from the street – but it’s still worth closing the curtains at night-time, in order to conceal your valuables.

When considering how well a folding door can stand up to the weather, we should consider the materials it’s made from (we’ll have more on those later).  In practice, no door can be 100% weatherproof, but folding patio doors tend to perform better because of the raised lip at the bottom of the door.  This provides us with some clue as to what really makes a folding door weather-resistant – the strength of the seal around the edges.  If these seals are made from rubber, they should collapse under pressure, filling any tiny gaps and thereby preventing moisture from entering and heat from leaving.  If you’d like to see just how effective a seal your door can create, try closing your folding door on a sheet of paper and seeing if you can move it.

You’ll want to be sure that your folding door is kept properly maintained – particularly if it’s built from wood.  Over time, changes in temperature and moisture can cause the glass to come loose from the frame, creating draughts and providing would-be burglars with an easy point of entry.  By occasionally washing, drying and re-applying a finish to a wooden folding door, you’ll be able to give it the best possible chance of lasting – and keeping the elements out for as long as possible.

How Do My Bi-Fold Patio Doors Open? 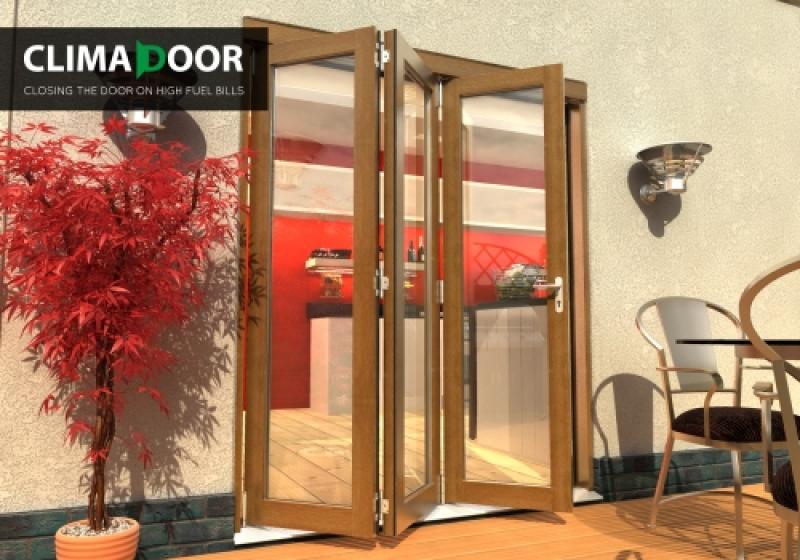 Folding doors, like traditional doors, can open either inwards or outwards.  They can also open in both directions at the same time.  The precise direction will depend on where the panels are tethered to the rails at the top and bottom of the door.  It the track is on the inner or outer edge of the door, then the door will open outward or inward respectively.  If it’s in the centre, the door will spread in both directions simultaneously.

Outward-opening folding doors tend to be preferred, as they leave more space in your interior for furniture and other items.  Be sure that you consider which way the door opens when you first install it – that way you’ll be able to avoid any unpleasant surprises when the door opens in the wrong direction.

We should also consider which side our door will actually open from.  As we’ve mentioned, folding doors can be symmetrical, opening from either side at once, or they can be asymmetrical.  Your choice will depend on where the door will be positioned – if it’s in the middle of a wall, you might find that a symmetrical, French-folding design lends it the required gravitas.

What Materials Can Bi-Fold Doors Be Made From?

Like all external doors, bi-fold patio doors tend to be made from one of three materials.  There are uPVC doors, there are wooden doors, and there are aluminium doors. uPVC is the cheapest and weakest of the three materials – though it’s low-maintenance and thermally efficient, it often lacks the strength to support large amounts of double-glazed glass, and so the frames must be made thicker to compensate.

Aluminium, by contrast, is extremely strong and durable, and, with a coating of powder-paint, will withstand the pressure of the elements capably.  Since it’s so strong, it can be used to create very thin frames – which allow for the maximum possible amount of light to filter into the interior.

Finally, there’s timber.  Wooden doors have a classic charm that’s favoured by many – and, though they require a little bit of maintenance to look and function their best, the results are almost always worth the effort.

Folding doors come in a wide range of different styles and configurations, each of which can have a spectacular impact on both the exterior and interior of your property.  When making your decision, be sure to consider the surrounding décor – but if your heart is truly set on a given design, don’t be afraid to shape the décor to match the door!

If you're having problems with your bifold doors, why not check out our advice on common bifold door problems and how to fix them.