French doors have been popular since glass first became widespread in windows across Europe more than two hundred years ago. They allow light to permeate from the outside of the home to the inside and help promote that all-important sensation of space.

Despite the fact that they’ve been around for so long, there remains some confusion concerning this particular sort of door.  Let’s address some of the more commonly asked questions about this enduring piece of technology.

A properly-constructed French door will not allow any cold air to penetrate from the outside of the house.  That said, over time the seal around the glass might degrade, which will eventually cause a leak to form.  Since French doors contain a lot of glass, there is more opportunity for this to happen – especially if that glass is divided into smaller chunks.  Drafts can be guarded against with the right maintenance, and cured with relative ease.

French doors tend to involve more sophisticated design and engineered than ordinary, windowless doors, and thus they tend to command a higher price.  There is an enormous amount of variety within the category, however, with some French doors starting at just a few hundred pounds, and others stretching all the way up to the thousands.  Those looking for a custom-made French door to fit a curved moulding, for example, can expect to pay the price of a small car.  Fortunately, most of us have less exotic needs.

These variations in price mostly correlate with variations in materials and style.  A French door with an unusual, curvy design is likely to command a higher price by simple virtue of the fact that it’s more difficult to make.

The materials used to make the door will also have a marked influence on the price – not just at the point of purchase, but afterwards as the door ages.  Wooden doors, especially solid wood French doors, will vary tremendously in price.  Once they’re installed, they’ll also need to be cared for periodically – particularly if the door in question is an exterior one. Sunlight will cause the wood’s finish to lose its shine, while moisture will accelerate warping and rot.  Only with the right maintenance will these problems be avoided.

One might expect that sound pollution would be a disadvantage of a set of French Doors.  After all, with so much of their surface being taken up by glass, there’s surely greater opportunity for sound waves to pass through.

This assumption, thankfully, is mistaken.  Glass may indeed be more sound-permeable than the walls of your house, but modern double glazing is a great deal more sound-resistant a solid-wood door.  Consequently, a set of French doors will be well-equipped to repel noise pollution. The quality of the seals at the sides of the glass will also play a part: high-quality seals will be able to exclude large amounts of noise; poor-quality ones will not.

If you’re looking for a set of doors that’s easy to use, then French Doors fit the bill nicely, as they operate in exactly the same way as almost every other door you’ll encounter in your life.  There are no complex mechanisms to fathom, nor intricate moving parts to malfunction.  It’s largely for this reason that their popularity remains consistent even after several centuries.

As with any set of double-doors, there’s a danger of a French door swinging shut onto an unsuspecting set of fingers.  But this threat is by no means unique to French doors, and can be guarded against with a few inexpensive items like doorstops. 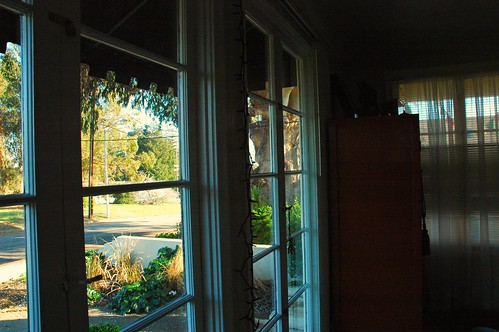 "Looking southeast out the French doors," (CC BY 2.0) by Wonderlane

French doors are often reported to be ‘a burglar’s favourite’, and this image is not entirely baseless. Since French doors contain lots of glass, they allow outsiders to easily see into your home and take stock of your valuables, and if the glass can be easily removed, then they’ll also offer the burglar a point of entry.  This is another reason why a quality seal around the outside of the glass is a crucial component of any secure set of French Doors.

Burglars will hesitate before smashing the glass to gain entry for several reasons:

Each of these factors contributes to the likelihood of the burglar being caught and successfully prosecuted.

If you’d like to further increase your door’s security, then you might invest in bolts.  Mortice rack bolts are unobtrusive, and will slide a bolt from one door to another with a turn of a key.  Alternatively, you might opt for bolts which secure your door to the floor or ceiling – just be sure that yours match your handles and hinges. Check out our detailed article on improving French door security for more tips.

How Do French Doors Work? How Do They Open?

French doors open either outward or inward.  Inward opening doors will clearly require a space clear so that they can open properly, which might be a problem in cosier homes.  Outward-opening French doors tend to be the less secure sort, as they offer burglars an opportunity to remove the hinges altogether, and thereby gain access.  Fortunately, this needn’t mean that your doors need necessarily swing inwards – special high-security hinges are available, which lock into place via special pins.

Common Problems with French Doors and How to Fix Them 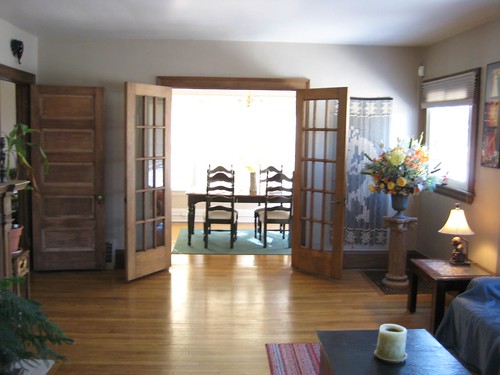 "Sunroom across the living room" (CC BY 2.0) by smoMashup1

Like any other technology, French doors sometimes run into problems.  Fortunately, these problems are often easily fixed.

Why Won't My French Doors Lock?

There are a number of reasons why your French doors might one day stop locking properly.  In the case of a wooden set of doors, the culprit is often warping – either of the door itself or the surrounding frame.  This effect will prevent the lock from engaging properly – fortunately, it’s often easily addressed, and prevented with regular maintenance to the door.

A much greater problem arises when the key breaks off in the lock.  This tends to occur when too much force is applied.  If you find that your lock won’t turn, then don’t try to force it.  Double check that you’re using the right key, and see if there’s any debris or ice clogging the lock.  If your uPVC door is struggling to lock, then it might have dropped slightly, causing the mechanism to fall out of alignment.  Try opening the door and locking it – if the lock works fine when the door is open, the door might just need adjusting (more on that shortly).  If the lock still doesn’t work, then the mechanism itself will likely need replacing.

Why Do My French Doors Leak?

French Doors have the potential to cause leaks, if the sealing holding the glass in place is not of sufficient quality.  By ensuring that the edges of the glass in your French door are tightly sealed, you’ll be able to not only prevent water from entering your home, but you’ll also be able to prevent draughts, and thereby ensure that your door is as thermally efficient as possible.

How Do I Adjust My French Doors?

Why Won't My French Doors Close?